The controller is often referred to as the “brain” of the engine because it translates the vehicle’s commands into engine action while monitoring the health of the engine. It makes real-time adjustments by tracking critical operating conditions, such as the speed of the turbopumps, combustion pressures and temperatures, thrust and propellant ratios. The new controller for the RS-25 engine is a significant upgrade from the controller used when the engine flew on the space shuttle and builds off the additional experience gained more recently with Aerojet Rocketdyne’s J-2X engine test program.

The new controller has 20 times the processing capability of the shuttle-era controller and offers increased reliability while providing a weight reduction of 50 pounds to each engine.

“Just think about all the advances in computing technology and electronics that have occurred over the recent years, we've been able to include those advances into the controller,” said Dan Adamski, RS-25 program director at Aerojet Rocketdyne. “We’ve been able to increase the processing speed, add memory and greatly improve the reliability of the entire controller communication network.”

For today's test, the new controller was installed on a development engine that is used to test new components. Once performance data is checked out, it will be installed on one of the four flight engines that will help power the first launch of SLS.

“Because humans will fly on SLS to deep space and the surface of Mars, it is imperative that we make our engines and the rocket as reliable and safe as possible," added Aerojet Rocketdyne CEO and President Eileen Drake. “Upgrading the controller and testing it out on a development engine is a crucial way to ensure safety.” 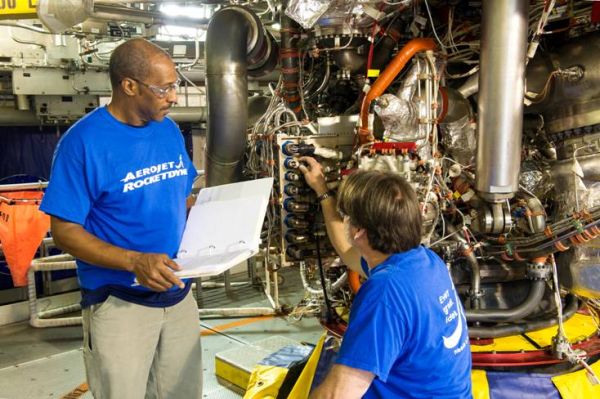