During today’s 260-second hot fire test, the RS-25 engine throttled up to 113 percent of its original design thrust level. The first four flights of SLS will use engines that max out at 109 percent of rated thrust (these same engines operated at 104.5 percent rated thrust when flown on the Space Shuttle). New RS-25 engines developed under Aerojet Rocketdyne’s restart program will baseline their thrust at 111 percent.

“Increased thrust requirements for the RS-25 are just one of the many changes in the SLS rocket’s performance that will facilitate our nation’s deep space exploration goals and objectives,” said Dan Adamski, RS-25 program director at Aerojet Rocketdyne. “While we can analytically calculate engine performance and structural capabilities at these higher power levels, actually demonstrating that performance with an engine hot fire provides the added confidence that these engines will meet all specification requirements demanded of SLS.”

The RS-25 is an updated version of the Space Shuttle Main Engine that helped power the Space Shuttle into space. There are 16 flight engines that will power the first four SLS flights in inventory at Aerojet Rocketdyne's Stennis facility. Fourteen of the engines previously flew aboard the Space Shuttle. The SLS rocket was designed for missions beyond low-Earth orbit carrying crew or cargo to the Moon or beyond. The initial configuration for what SLS can carry past low-Earth orbit and on to the Moon is more than 26 metric tons, with a final configuration of at least 45 metric tons. All SLS configurations are powered by four RS-25 engines attached to the 212-foot-tall core stage, the backbone of the rocket being built at NASA’s Michoud Assembly Facility in New Orleans.

“One of the key features of SLS is its versatility to support human and robotic missions, launching spacecraft, habitats and astronauts to a variety of deep space destinations said Eileen Drake, CEO and president of Aerojet Rocketdyne. “The lifting power of the SLS will permit NASA to get bigger payloads to distant planets more quickly than any other launcher operating today.”

The latest RS-25 hot fire test also was the fourth involving an additively manufactured Pogo Accumulator Assembly. The assembly is the largest 3-D printed RS-25 component tested to date. Newly manufactured RS-25 engines, to be used starting with the fifth SLS mission, will incorporate the additively manufactured Pogo Accumulator Assembly and other 3-D printed parts currently in development. This effort is one of many focused on making the engine more affordable for future missions.

The first SLS mission is scheduled for fiscal year 2020, when the rocket will blast off carrying an uncrewed version of NASA’s Orion spacecraft on a mission beyond the Moon farther than any human-rated space vehicle has ever traveled. The SLS-Orion combo is scheduled to fly a similar mission profile in the early 2020s, only this time with an astronaut crew on board. 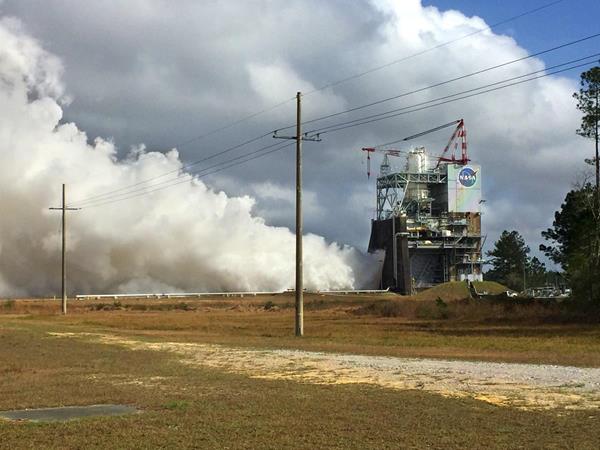