The massive Artemis I core stage for the world’s most powerful rocket will roar to life for the first time in a matter of weeks. The test aims to last up to 8 minutes, the same amount of time the stage will operate to get NASA’s Space Launch System (SLS) rocket to space. 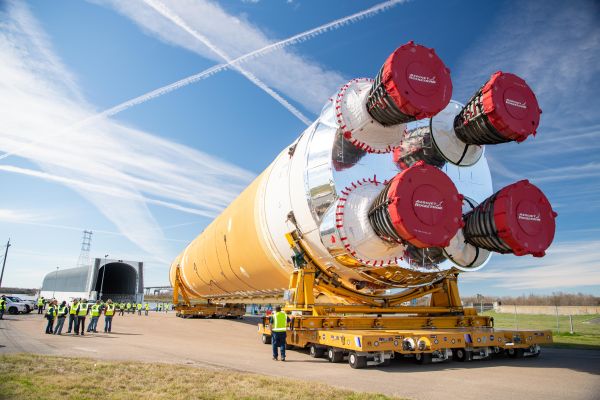 The SLS core stage, powered by four Aerojet Rocketdyne RS-25 engines generating more than 1.6 million pounds of combined thrust at sea-level, will undergo a choreographed throttling sequence that closely follows the rocket’s flight profile. A successful test of this complex new rocket stage will mean NASA and its industry team have taken one giant step toward the scheduled 2021 SLS debut on the uncrewed Artemis I mission around the Moon.

The upcoming event represents the dramatic culmination – a final exam of sorts – of the SLS core stage Green Run test campaign that began in January with vibration testing. The most recent such test, completed in September, provided critical verification of the control system and its related hydraulics as operators, gimbaled the stage’s four RS-25 engines just as they must move during flight to steer the rocket and maintain a proper trajectory.

“Ultimately, the Green Run will increase the SLS’s chances of success, not only for Artemis I but for subsequent missions, including the planned return of U.S. astronauts to the Moon,” said William Muddle, Aerojet Rocketdyne’s RS-25 lead field integration engineer.

“This is the opportunity to check all your systems out before flight,” Muddle added. “The Green Run is the first test that says, ‘hey, we’re confident this brand new rocket stage can launch a crew on a mission to Moon.’”

The RS-25 engines, originally built for NASA’s Space Shuttle program, have been updated with modern avionics and flight computers for the SLS. The basic core-stage configuration will remain unchanged through missions well beyond the 2024 mission to the Moon. Moreover, the initial SLS missions will use an upper stage, powered by Aerojet Rocketdyne’s reliable RL10 engine, which is flight-proven and currently flying on the United Launch Alliance’s Delta IV and Atlas V rocket. 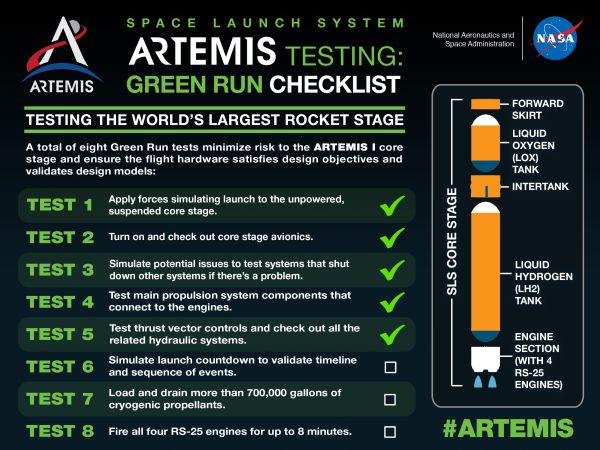 “The two most critical events during the planned 493-second test are ignition and shutdown, but inbetween there will be two major thrust changes,” said Muddle, who has been working on RS-25 engines since the heyday of the shuttle program.

The first change will see the engines throttled back from 109% of rated thrust to 95%, a dropoff that in flight is designed to ease the loads of what rocket scientists call Max-Q – the point of maximum dynamic pressure on a rapidly ascending vehicle. The second, occurring after the rocket revs back up to 109%, will take it gradually back down to 85%, just before the engines shut down altogether.

During those two periods, the engines will undergo tests of their thrust vector control systems, which point the engine nozzles to steer the rocket in flight. The idea is to see how these systems, which rely on the engines for power, will perform at relatively low thrust levels.

“Following shutdown, each of the engines will undergo a series of inspections and, if necessary, refurbishments, the last of the eight phases of Green Run testing,” Muddle explained. “Those inspections give you confidence that these Space Launch System engines are ready to fire again to send the Artemis I mission to space,” he added.

The logistics of the test provide some indication of its huge scale. For example, the equivalent of 114 tanker truckloads of super-cold liquid-hydrogen and liquid-oxygen will be delivered to six floating barges docked near the test stand to carry it out. That’s more than enough to fill the core stage propellant tanks, which hold a combined 733,000 gallons. But close to 225,000 gallons will boil off in the Mississippi heat or bleed out during various planned purges of the engines’ plumbing.

Beyond the sheer size of the effort, one of the truly unique aspects of the upcoming test is that it will be of actual flight hardware, rather than test article hardware, as is typically the case. This same core stage will launch the Artemis I mission, whereas the shuttle did similar tests but with hardware that was never flown.

The engines themselves already have a rich flight history with the Space Shuttle Program. Each flew multiple missions, including flights to assemble the International Space Station, repair the Hubble Space Telescope, and make then-U.S. Senator John Glenn, the former Mercury astronaut and first American to orbit the Earth, the oldest person to fly in space. In fact, according to Muddle, each of the four engines contains some hardware that flew on the very first shuttle mission, STS-1, all the way back in 1981. 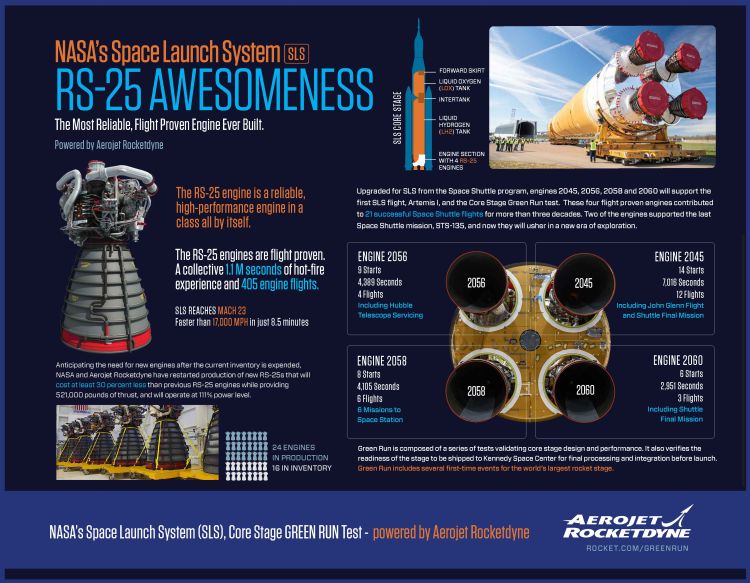 Muddle has his own history with the engines, having spent the better part of his more than three decades at Aerojet Rocketdyne refurbishing RS-25s for upcoming shuttle missions at NASA’s Kennedy Space Center in Florida. “They’re like my children,” he exclaimed.

With the Space Shuttle fleet having retired in 2011, Muddle clearly takes pride in moving on to take the nation to new heights in space exploration.

“I’ve spent a long time in the firing room during engine tests,” commented Muddle, who started with the shuttle program at Kennedy Space Center in 1989. “Seeing those engines fire up shows you the power that makes human spaceflight possible. It’s exciting to see that America is building on our legacy in space to send people on new bold space missions.”