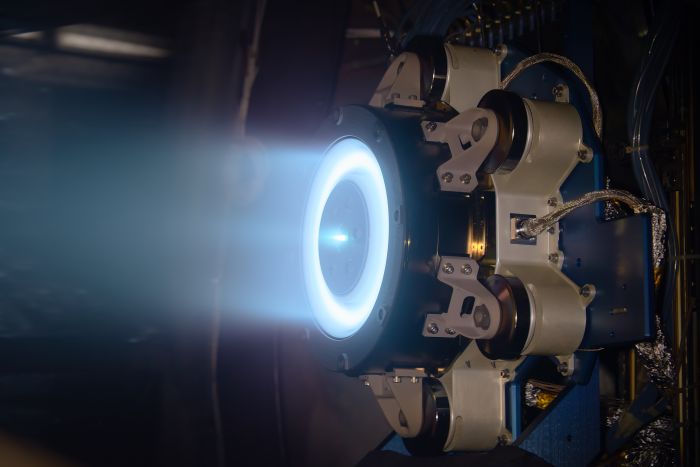 June 2022 - Earlier this year, Aerojet Rocketdyne and NASA conducted a Critical Design Review (CDR) for the Advanced Electric Propulsion System (AEPS) thruster that will be employed on the Power and Propulsion Element (PPE) of the lunar Gateway, which is being developed by NASA and its international partners.

Aerojet Rocketdyne will now begin to build the flight hardware to support the planned 2024 launch of the initial elements of Gateway. Representatives from NASA and an independent review team from Aerojet Rocketdyne worked together to ensure the thruster design meets mission requirements and the program is ready to move forward with full-scale fabrication, assembly and testing.

NASA’s Artemis plans will establish a long-term presence on and around the Moon, including landing the first woman and first person of color on the Lunar surface and Gateway is critical for future crewed Artemis missions. The AEPS thruster will enable the Gateway to maneuver in lunar orbit where it will support landings on the Moon.

Three 12 kilowatt (kW) AEPS thrusters will serve as the primary source of propulsion on the PPE to enable orbit transfer and in-space maneuvering. Each thruster operates at 12 kW—more than twice the power level of electric thrusters flown on satellites today—providing a higher thrust output for maneuvering and station-keeping.

Aerojet Rocketdyne is slated to deliver the three AEPS flight thrusters in late 2023 or early 2024, ahead of the co-manifested launch of the PPE and Habitation and Logistics Outpost (HALO) module, planned for late 2024. The AEPS thrusters will propel the integrated PPE-HALO vehicle in a 10-12 month lunar transfer orbit, after which the spacecraft will enter a near-rectilinear halo orbit around the Moon.

The AEPS flight thrusters were developed by Aerojet Rocketdyne at the company’s facility in Redmond, Washington, for NASA’s Space Technology Mission Directorate and as part of NASA’s Solar Electric Propulsion project. The project is managed by NASA’s Glenn Research Center in Cleveland, Ohio.