December 20, 2022 - Two years ago, the nation locked down due to the COVID-19 pandemic, but that didn't prevent Aerojet Rocketdyne's Evan Unruh from making an impact in his field.

While working on a ground-breaking rocket engine in the Propulsion Research Center at the University of Alabama in Huntsville (UAH), Unruh pursued his Master of Science in Mechanical Engineering.

"Evan put it all together and made it run during the pandemic," Dr. Robert Frederick, director of the Propulsion Research Center at the University of Alabama-Huntsville, said of Unruh, who is a UAH alumnus and Aerojet Rocketdyne engineer. "He's an excellent citizen; an excellent worker," Frederick said.

Unruh received the UAH "Hard Charger" Award at the center's 30th anniversary banquet earlier this year. He was recognized for his work assisting Dr. Gabe Xu, Associate Professor of Mechanical and Aerospace Engineering, in receiving a $1.5 million grant from the University Consortium for Applied Hypersonics and for his support of Dr. Frederick in student coursework during the pandemic. 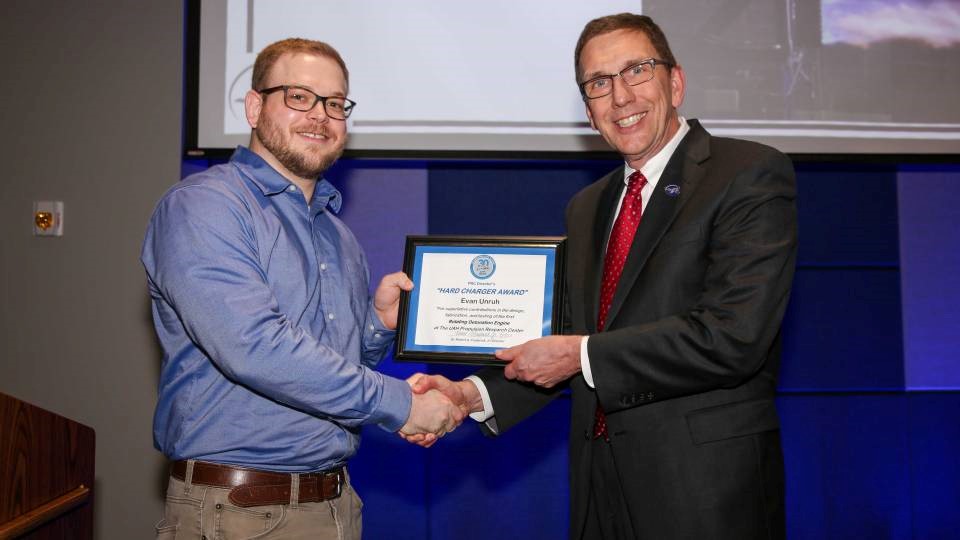 "Evan was good at working with people," Frederick said. "He did a great job as a TA (teaching assistant) and mentoring students."

For Unruh, a native of Oregon, becoming a hands-on engineer was an easy fit.

"Growing up, my dad did a lot of woodworking," he said. "I like to work with my hands and that led me to propulsion engineering."

In his Master's thesis, "Development and Testing of a Rotating Detonation Rocket Engine with a Racetrack Combustor and Shear-Coaxial Injectors," reimagined how a detonator engine works. "Instead of burning the propellants like a candlewick, we're exploding them to get more efficiency," Unruh said.

Unruh's ability to tackle this new technology while balancing so many other responsibilities caught Frederick's eye. "Evan thrives in that fast-paced environment. He made it work," Frederick explained.

"We bought some tools, bought a stand, went to the student machine shop and built an engine," Unruh said. "A test stand is an expensive item to hand to a student. I ended up with a much more holistic educational experience, thanks to my time at UAH."

That holistic approach to education is the thing Unruh valued most about his time with UAH's Propulsion Research Center.

"He's a very deserving student," Frederick said. "He went through a lot of different programs. He helped with classes, was sort of the utility infielder in our lab and still had time to get his Master's. That was his superpower."

Unruh is bringing that "superpower" to Aerojet Rocketdyne as a Design Engineer, helping design the next generation of air-breathing propulsion systems and – as a result – ensuring that Aerojet Rocketdyne continues to fulfill its mission of enabling national defense and space exploration.