Aerojet Rocketdyne is the sole propulsion provider for the OSIRIS-REx spacecraft, providing all 28 rocket engines aboard and supporting the mission every step of the way.

OSIRIS-REx executed its sample collection of asteroid Bennu on Oct. 20, 2020. By studying the surface material collected on asteroid Bennu, we will learn more about the formation of our solar system and the composition of other near-Earth objects.

“Our engines will have enabled OSIRIS-REx’s mission from start to finish. From helping to lift the launch vehicle off the ground, to surveying the asteroid and collecting the sample, to ensuring the sample is returned safely to Earth, Aerojet Rocketdyne is there every step of the way,” said Jim Maser, Aerojet Rocketdyne’s Sr. Vice President of Space. 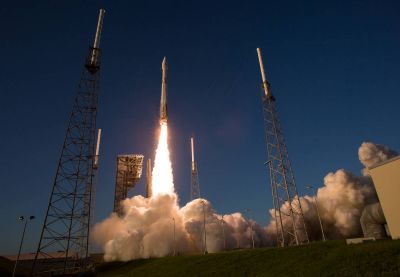 OSIRIS-REx‘s propulsion suite includes a variety of Aerojet Rocketdyne thrusters, including: four 60-lbf MR-107S, six 5-lbf MR-106L, 16 1-lbf MR-111G, and two 0.1-lbf MR-401. While only the MR-107S engines will be used for the trip home, the rest of the thrusters played critical roles in other mission elements up to this point. All 28 engines on OSIRIS-REx were developed at Aerojet Rocketdyne’s facility in Redmond, Washington.

Check out the below video to learn more about the extensive suite of Aerojet Rocketdyne propulsion that enabled the OSIRIS-REx mission every step of the way.