August 22, 2022 - In addition to opening a historic new chapter in space exploration, the upcoming debut of NASA's Space Launch System (SLS) rocket on the Artemis I mission will mark a return to flight for four main engines that already have a remarkable history of their own.

The SLS's RS-25 core-stage engines that will power the Artemis I mission flew a combined 21 missions as part of NASA's Space Shuttle program, including roles in International Space Station assembly and repair of the agency's Hubble Space Telescope. They will be making their final flight on SLS.

Supplied by Aerojet Rocketdyne, the RS-25 is derived from the Space Shuttle Main Engine. The first four SLS missions will use heritage shuttle engines that have been refurbished, outfitted with new controllers and thoroughly tested to make sure they are ready for launch.

"It's gratifying and exciting to see these engines taking us back to the Moon," said RS-25 deputy program manager and former Space Shuttle Main Engine chief engineer, Doug Bradley. "SLS will provide NASA with reliable access to deep space and part of that reason is the proven engines that help power the launch vehicle."

Artemis I will send NASA's Orion exploration spacecraft on an uncrewed flight to cislunar space and back. The RS-25s supporting Artemis I have a shuttle history that began in 1998 and ended with the final flight of the program when Atlantis delivered supplies to the International Space Station in July 2011. 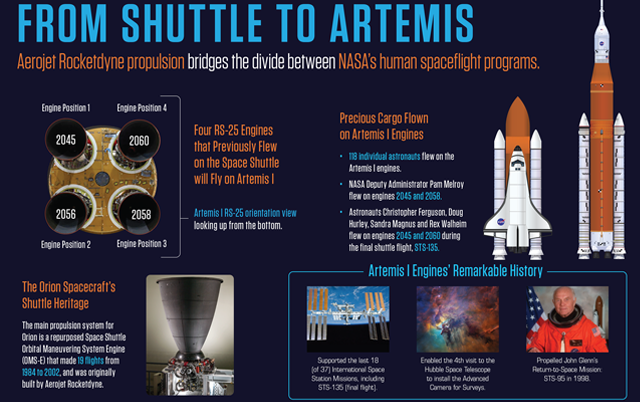 Engine No. 2045 has the most experience of the lot, with 12 shuttle missions under its belt, 10 for space station assembly, logistics and crew transport. The hardware elements deployed on these missions included sections of the truss structure, a part of the mobile work platform for Canada's robotic manipulator arm and the exposed part of Japan's Kibo science module. That engine also has the distinction of going to Russia's Mir space station in January 1998, and helping to make NASA Mercury astronaut and then-U.S. Senator John Glenn the oldest person to fly in space some nine months later.

Engine No. 2058 made six flights, all to the space station. Notable hardware delivered on these missions included truss sections, the pressurized module of Kibo, and the U.S. Node 2/Harmony module, which connects the major U.S., European and Japanese elements of the orbiting outpost.

Engine No. 2056 made four flights, three to the space station and one to service the Hubble space telescope. During the March 2002 Hubble servicing mission, astronauts replaced the iconic observatory's solar panels and replaced its last original instrument, the Faint Object Camera, with the Advanced Camera for Surveys.

Finally, engine 2060 made three flights, each in tandem with No. 2045 to the space station, including the last shuttle mission, STS-135.

In total, 118 different astronauts previously flew on the four Artemis I engines. In fact, astronauts Steve Lindsay, Charles Hobaugh and Stephanie Wilson flew three times on one or more of these engines.

Shuttle-heritage hardware on Artemis I is not limited to the RS-25. The bi-propellant-fueled main propulsion system for Orion is a repurposed Space Shuttle Orbital Maneuvering System Engine (OMS-E) that made 19 flights from 1984 to 2002.

Dubbed the Orion Main Engine (OME) for the Artemis program, this particular engine, No. 111, operated on three different orbiters: Atlantis, Discovery and Challenger. Notable missions include the first flight of Atlantis, deployment of Hubble and of the Compton Gamma Ray Observatory, and multiple space station assembly and resupply missions.

Artemis I will mark the final piece of history for this OME as well as the RS-25 engines on the mission. The maneuvering engine is attached to Orion's service module, which is discarded prior to when Orion reenters Earth's atmosphere.

"It is such an honor to lead the team that is responsible for upgrading the Orion Main Engine for the Artemis I flight, but I have a special connection to this hardware as it was originally manufactured in part by my grandfather who was a welder for Aerojet during the shuttle era," said Orion Program Manager, Don Mahr. "We're going back to the Moon and we're going to stay this time, and that is only possible because of the generations of Aerojet Rocketdyne employees who have and continue to make it all happen."