What started out in 1915 as General Tire & Rubber Company in Akron, Ohio, has evolved over a century into one of the nation’s strongest aerospace and defense leaders.

The company’s diverse history includes forays into ownership of everything from radio and television stations to movie studios to hotels and even at one time an airline company.

In 1945, General Tire & Rubber jumped into the aerospace and defense industry with the purchase of Aerojet Engineering Corp. With the merger of Crosley Motors in 1953, the subsidiary was officially renamed Aerojet-General Corporation.

Over the last 10 decades, the company has led efforts that have helped further our nation’s advancements in space and our development as a global superpower. 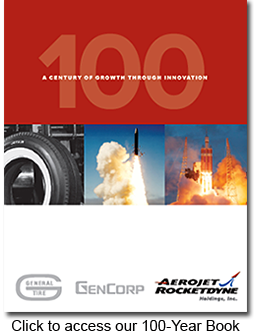 During World War II, the company’s jet-assisted take off (JATO) units allowed military planes to launch from short runways and aircraft carriers. And during the Cold War, Aerojet solid rocket motors powered the dependable anti-aircraft HAWK missile that is still being deployed more than 60 years later.

Contributions to the national space program have been equally significant. The company was at the heart of America’s Space Age, helping Apollo 11 transport the first astronauts to the moon’s surface and safely back home in 1969, and taking part in every space shuttle mission flown among many other milestones. To date, Aerojet Rocketdyne has helped power more than 1,600 rocket launches and today stands at the forefront of the world’s journey to Mars.

In 1984, the General Tire & Rubber name was changed to GenCorp and it was established as a parent holding company. Eventually, the company exited the tire business entirely by divesting General Tire in 1987.

On April 27, 2015, the corporate name of the company was officially changed from GenCorp, Inc. to Aerojet Rocketdyne Holdings, Inc. to honor the company’s heritage of continuous product innovation and mission success and to recognize its significant contributions to national defense and space exploration for more than 70 years.

Today, Aerojet Rocketdyne Holdings, Inc. stands as one of the nation’s oldest and most innovative companies with nearly 5,000 employees around the globe. We are 100-years strong, and we are proud to continue our focus on sustaining ideas that power freedom.